The Francisco Street Reservoir dates to the 1850s and now does double duty as both a source of non-potable water and a park. When originally built in 1859 it was the first large reservoir in San Francisco, which was designed to supply fresh water to the rapidly increasing population brought on by the gold rush and the Comstock Lode. At first, water was delivered downhill to the reservoir from Mountain Lake using a wooden flume and pump systems at the base of the hill. Decommissioned in the 1950s, the site was to be redeveloped, but the Francisco Park Conservancy fought for decades to keep it as a natural resource that would include harvesting rainwater.

The 4.5-acre Francisco Park features a picnic area, dog run, community garden, reservoir interpretive area, children’s playground and restrooms. Underneath the large central open area is a stormwater capture and reuse system that will perpetually provide water for the park’s irrigation and toilets. 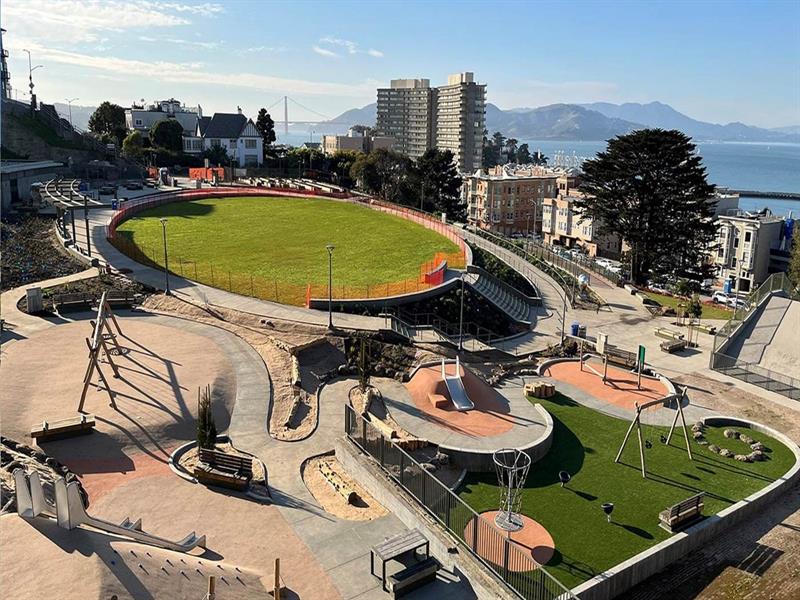 Collected stormwater is treated to produce non-potable water that meets San Francisco Department of Public Health standards. This water is reused to meet the site’s irrigation and the flushing needs of six toilets. The stormwater is first stored in a 1.9 million-liter cistern at the top of the hill before being transferred to the Service Building where it flows through a series of filtration and disinfecting processes. This ensures that the water meets public health regulations while saving 5.7 million liters of potable water every year by not having to use city water. There is also a smaller unit at the bottom of the hill. The engineer decided to use a system of arched chambers because they would provide the largest storage volume per square meter.

“The reservoir is on a slope that is just under 20 percent. It’s a very challenging site from a variety of perspectives,” explained Cody Anderson, P.E., Principal of Sherwood Design Engineers (San Francisco) and responsible for the stormwater system. “Normally you’d have your catch basin at the bottom of the site. Here, the historic reservoir is midway up the slope, so half the runoff is collected via gravity flow and the rest collected at the bottom of the site and pumped. All captured runoff flows through the screening filtration and into the chambers for storage and later use.” 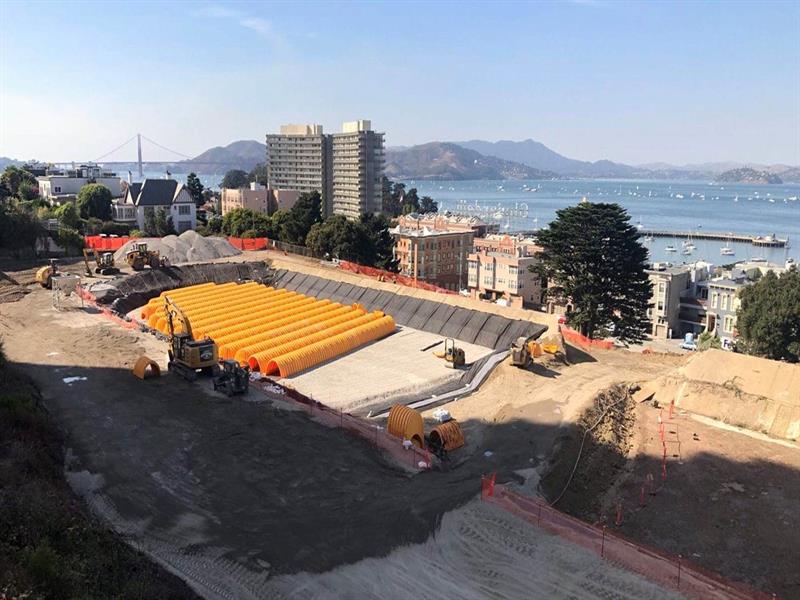 A product of Advanced Drainage Systems, Inc. (ADS) the chambers are independently tested, BBA approved and fully compliant with ASTM F2787, F2418 and F2922. ADS StormTech is engineered to provide a durable below ground surface water attenuation and storage solution for any size of commercial, residential, industrial or infrastructure installation. Three StormTech Isolator® Rows are included in the system. These patented water quality treatment devices are integral to the StormTech system. They capture the ‘first flush’ and trap sediment and other total suspended solids (TSS) and other pollutants coming from stormwater runoff.

In this project, standard StormTech chambers were deployed in a unique way to solve this engineering challenge. StormTech chambers come in a wide range of sizes, making it easy to install for all conditions, including small chambers for shallow invert depths, and large chambers for reduced footprints. They’re also highly adaptable and can be configured around obstacles and afford multiple inlet and outlet positions. Standard pipe manifolds, manhole & access chamber inlet/outlet structures and flow controls can be used. An additional benefit is that StormTech chambers can be maintained using standard sewer cleaning equipment.

“We do a lot of projects where we look at holistic water management,” Anderson said. “There are competing products on the market, and we needed to store as much water as possible in the given area. We work on projects around the globe with an emphasis on sustainable development and we’re known for having the vision and the technical capacity. The Francisco Park is one of those projects of a lifetime. It’s reclaiming an area in the city of San Francisco that is now a beautiful park for the people.”

Microsoft will be phasing out Internet Explorer soon. Because of this, we did not build the site to be used with IE. Please use Chrome, Edge or another browser to fully experience the new ADS website. .

We use cookies on this site to enhance your user experience.
For a complete overview of of all cookies used, please read more here.