When sinkholes began to develop along the outer edge of the safety area for the main runway at the Tuscaloosa Regional Airport, the city took action to save the airport, prevent damage to aircraft and protect the field maintenance crew by replacing the stormwater drainage system. Video inspection inside showed that sediment was infiltrating through the separation of some concrete pipe joints and, to a greater degree, through failed mortar joints in the brick inlet structures. To stop future sinkholes due to infiltration of water into the system's Class III reinforced concrete pipe (RCP), the decision was made to use polypropylene pipe that has high-integrity gasketed joints between sections.

The Tuscaloosa Regional Airport is a general aviation airport with multiple fixed-based operator centers (FBO) serving some 60,000 charter, cargo, military, and private aircraft operations each year as a vital economic engine for the city and the region. The $1.08 million construction portion of the project was completed in just 116 work days. 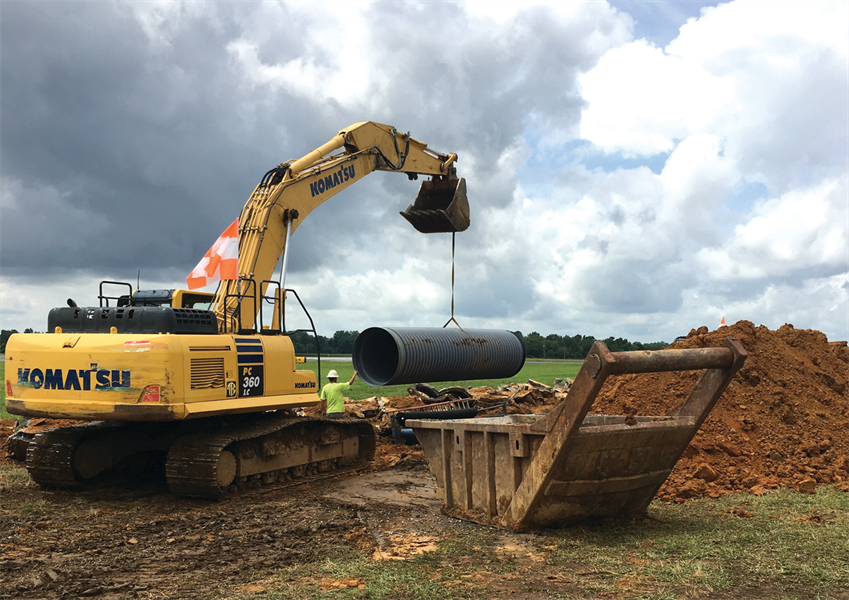 More than 3,700 feet of polypropylene pipe - HP Storm and SaniTite® HP - from Advanced Drainage Systems, Inc. (ADS)(NYSE: WMS) was installed in diameters ranging from 24 to 48 inches in trenches with up to 13 feet of cover. The majority of the pipe was dual-wall. At locations where the pipe connected into an inlet structure, a double-gasket connection was made from the dual-walled HP Storm pipe to a section of triple-walled SaniTite HP pipe.

"The last thing we wanted to do was to spend more than a million dollars on this rehab effort and then have a joint fail, resulting in sediment getting into the pipe as it did before and creating sinkholes," said C. Darren Duckworth, P.E., Project Manager, Aviation Services for Atkins, the project’s designer. Atkins is a member of the SNC Lavalin Group.

"ln light of the sinkhole formations that propelled the need for this project, a major focus of the design was to specify watertight connections to reduce the opportunities for sediment to infiltrate into the rehabilitated system. As an additional measure of protection beyond the usual soil-tight gasket connecting the sections of ADS HP Storm pipe, we also specified double gaskets like those that would be used in a sanitary sewer application. This provided an additional measure of sealing beyond typical measures of soil- or silt-tightness to the 10.8 psi.” 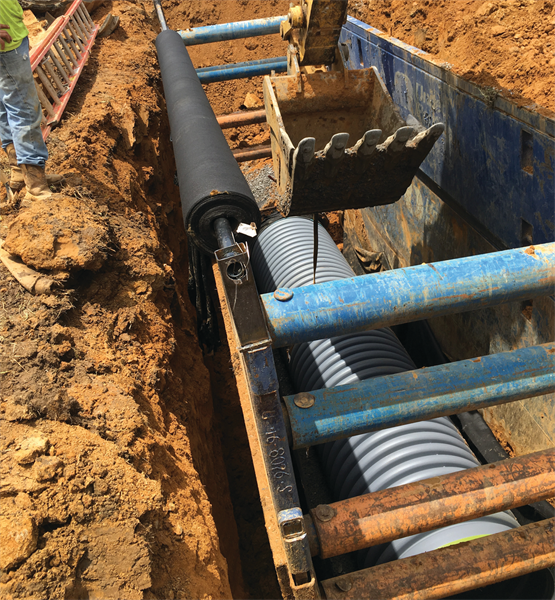 Designed for gravity-flow drainage applications, the ADS pipe provided the required strength, stiffness and joint performance. The dual-wall and triple-wall profile design meets or exceeds ASTM F2881 or F2764 and AASHTO M330and is approved by the Army Corps of Engineers for storm drainage applications. It also meets FAA specification D-701.

The pipe was selected and approved also because of its watertight connections that will prevent exfiltration, which destroyed the concrete pipe and its mortared joints that caused the sinkholes.

"The teamwork and cooperation among the project’s stakeholders," said Duckworth, “including the Tuscaloosa RegionalAirport, Atkins, REV Construction, and ADS, enabled

Microsoft will be phasing out Internet Explorer soon. Because of this, we did not build the site to be used with IE. Please use Chrome, Edge or another browser to fully experience the new ADS website. .

We use cookies on this site to enhance your user experience.
For a complete overview of of all cookies used, please read more here.